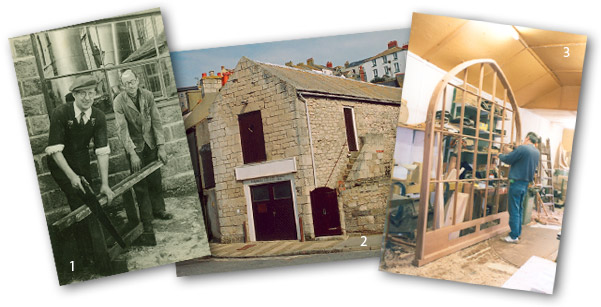 Portland Joinery are recommended by Weymouth & Portland Borough Council for work in Conservation areas and on Listed Buildings. They are registered with the Glazing Federation and are also a FENSA registered Company, specialising in bespoke joinery including windows, doors, stairs, cupboards and kitchens.

James Wilson, a joiner from Edinburgh, established the business in 1958, working from the garden of his home in Weymouth, Dorset. He was joined by his son Roger, as an apprentice, in 1962. The firm was known as James Wilson & Son. In 1973, Roger acquired a workshop in Chiswell, Portland, Dorset. James retired in 1984 and Roger continued to work alone until 1995, when he was joined by his son Jamie. The firm became known as Portland Joinery from 2002. The following year they moved to the current workshop on Chesil Beach, Portland, trading as a limited company.

1. James Wilson in Weymouth in 1957.
2. The old workshop, vacated in 2000, a former church in Chiswell called Conjurer’s Lodge.
3. Conservation work: A large window for a grade I listed building.

What our customer say

Great job. We love our windows and French doors.

May I say how pleased we are with the finished result, a job very well done. thank you.

Thank you very much for the splendid job you did with the doors. we are extremely pleased with them and will definitely be recommending your services.